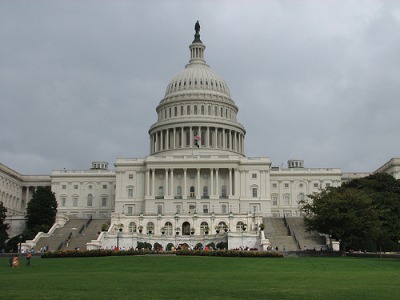 Our government isn't actually haunted, as far as I can tell, but you might be tempted to assume so with the number of demons claimed to occupy it nowadays. I ran across this article on Reddit today, tellingly entitled "Republicans who Support the Tea Party are Traitors." The author claims that the Tea Party is attempting to destroy the Constitution, which is being valiantly defended by the political left, and that Republicans who support the Tea Party in its mission to do so are, and should be thought of as, traitors.

For obvious reasons, one article on the internet is hardly cause for alarm or righteous indignation, but there is a building trend of ratcheting rhetoric that someone would have to be almost completely removed from politics not to notice. Consider Senator Elizabeth Warren's railings on the Senate floor, for example, or virtually any article from Salon.com's political section. I stopped reading Paul Krugman quite a while back, but he is among the most widely-read journalists alive today, and one could summarize every column he's written in the last few years in 4 words: "It's the Republicans' fault." One can only imagine what he's been writing in the last few weeks. I know I can, and quite accurately too.

I hear grandiose indictments of the opposing political party--"Republicans/Democrats are what's wrong with this country!"--from friends and family members on a regular basis, and I'm sure that if the reader is remotely interested in politics or has obnoxious, politically-inclined friends (like the author) who are, they've heard similar statements, or perhaps even uttered it yourself. The senators, representatives, and even partisan citizens who vote for the other side are either racists and corporate pigs that don't care in the slightest for anyone but themselves and their compadres, or they're socialists/communists who hate freedom and hate America, and can't handle personal responsibility. I have a slightly different contention: people who demonize the other side, particularly without understanding their perspective and arguments, are what's wrong with this country. And I urge you, the reader, to join me in publicly and repeatedly demonizing the demonizers.

Allow me a slight digression; I don't really watch TV much, but there are a few shows I enjoy, and one of them is a wonderful little call-in show out of Austin, TX called The Atheist Experience, hosted by Matt Dillahunty and other members of the Atheist Community of Austin. In one of the episodes, a caller asked one of the hosts (Jeff Dee, if I'm not mistaken), an "atheist book" to get started on, no doubt expecting a recommendation of Harris, Dawkins or Hitchens. Instead, the host recommended Carl Sagan's book The Demon-Haunted World, which is less about religion and belief and more about advocating a scientific way of thinking. The implication of the title is, of course, that although we used to think of the world as inhabited by spirits, gods, and even devils and demons, closer inspection, reason, evidence, and science can show us better explanations. There are no real demons.

So too, in my own view, are there no demons in the Senate, or at least FAR fewer than the true believers on each side of the debate would have you believe. I can't really claim this as an original idea of my own--Jonathan Haidt made this point years ago, and even advocated "demonizing demonization," but I think it's a point that bears repeating (again). It's a point that Penn Jillette has made over and over again as well, that if you pick the person, they're all good, but most people still seem to assume that everyone out there is at best an asshole and at worst, outright evil... everyone except them and the person they're talking to, of course.

Liberals who are reading this, conservatives generally assume the following about you:


If you're a liberal, the absurdity and offensive nature of these assumptions is obvious, but how can they not assume these claims to have a grain of truth when the people you vote for have the following to say about them?

Conservatives are:
Know that conservatives reading this list are laughing and crying on the inside (or perhaps even out loud) just as much reading this list as you were reading your own politically-biased descriptors. The lists are equally inaccurate, as well as about equally insulting, but are both widely held to be true by their respective political partisans. If you are one of those people who believe that the other side is just a rabble of ignorant fools, then I have a message for you: they aren't what's wrong with America. Sarah Palin, Rush Limbaugh, Barack Obama and Dianne Feinstein aren't what's wrong with America--you are.

I'll close on an uncomfortably conciliatory note, by quoting two uncharacteristically prescient and wise passages from the Bible. In Matthew 7, Jesus tells his followers to worry about the plank in their own eye before they hypocritically attempt to remove the speck of dust from their brother's eye. For safety reasons, it's inadvisable to attempt to remove foreign objects from other people's eyes, generally speaking, but allegorically it's sound wisdom, and one Christians as well as non-Christians should meditate on a bit more; more than they demonstrate by their actions, that is. Secondly, in Mark 3, Jesus tells his disciples that a house divided against itself cannot stand. I'm not sure that this is actually true generally; healthy disagreement is good for the pursuit of knowledge, truth, beauty and wisdom, but too much strife and you end up with the exclusive psychology of teams and tribalism, and the dangers that lie within, of which we've seen plenty throughout human history, particularly in the 20th century. We're much further down that path than is safe and healthy for a country, and violence, even civil war, isn't beyond the realm of possibility, unlikely though it may seem in the moment. Don't think 'it can't happen here.' As Sam Harris has said, we have two options: we can either solve our differences through a battle of ideas, or through a battle of physical violence and force. When you dismiss the other side of an argument as evil instead of merely being incorrect--as a demon, in other words--without honestly allowing a legitimate battle of ideas to take place, you're moving us away from the liberal, Enlightenment ideals of the former option, and ever closer to the Dark Age latter. The Government isn't haunted, and if you're one of those people claiming it is, you are the demon.
Posted by C.B. Robertson at 9:15 AM