What is it she needs?

The above photo is not a stand-alone picture of a girl who has come to believe all on her own that she's been shorted by our culture. In the bottom right hand, you can see the reference to a Facebook group called "Who Needs Feminism[?]," which is itself part of a much larger trend of people taking pictures of themselves holding descriptions of why they need Feminism.

Remember this phrase: "I need Feminism."

What is Feminism, exactly? The snarky answer proffered to us by many self-proclaimed feminists is that it is "the radical notion that women are people too." But "what is a person?" is a complex, abstract question, let alone the even more complex question of what person-hood means about how we ought to treat them. More to the point, you'd be hard-pressed to find this elusive foe who doesn't think that women are actually people, which is especially shocking when we're repeatedly told that we live in a society dominated by such people and attitudes. No, this won't do.

Google's default definition is that feminism is "the advocacy of women's rights on the grounds of political, social, and economic equality to men." This one is not quite as blatantly unhelpful, as it gives something concrete. But concreteness means falsifiability, and women already have the same rights as men do in the United States, politically, socially, and economically. More, in fact, especially when it comes to family courts, the draft, and defining sexual assault. Google's definition won't help us out either.

Feminism is extremely difficult to pin down precisely, but we get the idea that it has something to do with equality and empowering women.

Whether you agree with her philosophy or not, Ayn Rand was a female force of nature. When readers rate the best novels of all time, Rand's works occupy four out of the top ten slots (including first and second place). The protagonist in her masterpiece Atlas Shrugged was as self-confident, successful, and inspirational as the author herself. Her message of self-reliance and the worship of competence and creativity is a message of equality and empowerment.

So why do feminists ignore and even criticize her?

Because Ayn Rand doesn't need Feminism. Ayn Rand is not dependent on Feminism (or anyone else, for that matter), which deprives Feminism of it's power.


"They're asking for government power and government handouts." Unlike our first two examined definitions, Feminism defined as a movement seeking power by appealing to the needs of women perfectly matches their actions and attitudes.

But I think the main reason why Ayn Rand annoys feminists so much isn't her disagreement with the doctrine itself, nor is it her independence. It is because she perfectly embodies everything that Feminism claims to be about but isn't, and exposes the deceit in their stated intentions by the black-and-white contrast between Rand's independence and dependence of Feminism.

Paul Elam, host of "A Voice for Men," describes the effects of such dependence and externalization of problems from his own past as a former feminist in the mental health and addiction treatment industry:


When I first saw it, I really thought that it was just the next logical step in a society that was looking for equity and looking for fairness and justice. But as time passed, even as I was involved with it myself, I noticed a lot of animosity, a lot of vitriol, a lot of the ideologues that were supposedly looking out for the interests of women actually expressing a message that was targeting men as their problem. I witnessed, in the mental health field, the idea that we were treating addictions, and maybe adding information about special populations in order to enhance our ability to help  people, [turn] to something entirely different. It became a blame-game. Women came into treatment and were basically told by a lot of people that all of their problems were rooted in men, which is of course the complete opposite; the idea of good chemical dependency treatment is that we treat people with accountability for their problems, that we acknowledge that they must take responsibility for their lives if they're going to address a problem that involves their own choices, which addictions certainly do. [Full interview with Janet Bloomfield]

The test of a good theory is its ability to explain reality. Why would Feminism want to go against standard industry knowledge about mental health and hurt women by convincing them to externalize their problems and blame men? This would make no sense if Feminism was a movement about helping and empowering women, but would make perfect sense if it was actually about using women's issues as a lever to gain power.

Simply defining Feminism as a gender-wedging grab for political power and resources would make it bad enough; it's nature is why I distance myself from it and oppose it in principle. But those aren't sufficient to justify my loathing for it and my opposition to it in practice. For me, it's more personal.

Baptisms that spark the intellect can happen in different waters. For some, it's politics; for others, economics. For me, it was religion, or, to be more precise, atheism. I read Dan Barker's book "Godless" and was hooked. I read Dawkins and Harris, and then I discovered Christopher Hitchens... It is said that ninety percent of people fall somewhere on the scale of bisexuality. I'm in the ten percent who don't--I'm completely and absolutely heterosexual--but I feel no shame or dishonesty in saying that Hitchens was, in a way, my first real love. While these encounters opened me up to the doors of politics, economics, philosophy, and literature, I always felt a special interest in studying religion and an attachment to the atheist community. 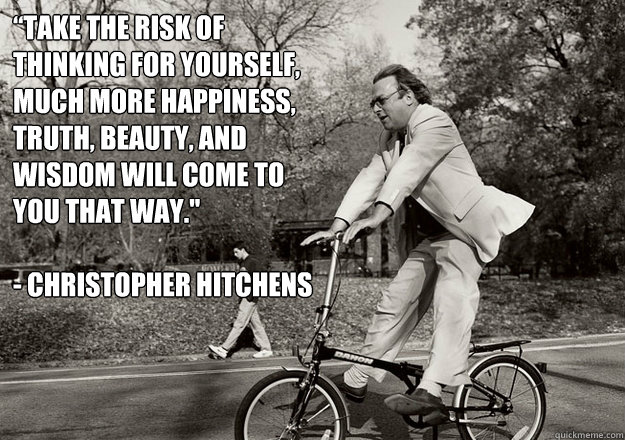 Then, in July of 2011, Feminism began taking over the Atheist community.

It began with the incident obnoxiously and misleadingly dubbed "Elevatorgate," in which Rebecca Watson, a speaker at the conference, was complimented by a man in an elevator at the hotel for her work and asked if she wanted to join him in his hotel room for coffee. In her vlog about the event, Watson said "guys, don't do that." Both the man's non-confrontational proposition and her unequivocal rejection were, by any reasonable standard, reasonable. The response, however, was not. A few men stated that it was unreasonable to tell people not to flirt at conferences, and they, in-turn, were told that the Atheist community needed to be a safe place for women. As rationalwiki describes, the incident became a "kerfuffle touching on feminism, privilege, conference creeps and the social makeup of the skepticsphere."

As the back-and-forth escalated, a schism formed within atheism, between those self-identifying as feminists, and those who did not. In December of 2012, it reached the point where atheist blogger PZ Myers said: "Right now, for instance, the internet community is racked with these paroxysms of argument over--of all things!--the status of women. We're trying to decide whether women are eye candy and fuck toys and eye candy for privileged white men, or whether we're colleagues together in this movement." People who did not join the Feminist side were ostracized and demonized: the blogger and creationism-debunker extraordinaire Thunderf00t was kicked out of Freethought Blogs. Notorious vlogger TJ Kirk, The Amazing Atheist, was shunned and attacked for his criticisms of Feminism. PJ Myers casually accused Michael Shermer--another non-feminist--of raping a woman at a conference (libel charges are still pending). Even Richard Dawkins has been variously accused of being a misogynist within the world of atheism for laughing at the pettiness of women's complaints in comparison to the harms women experience from religious abuse worldwide. 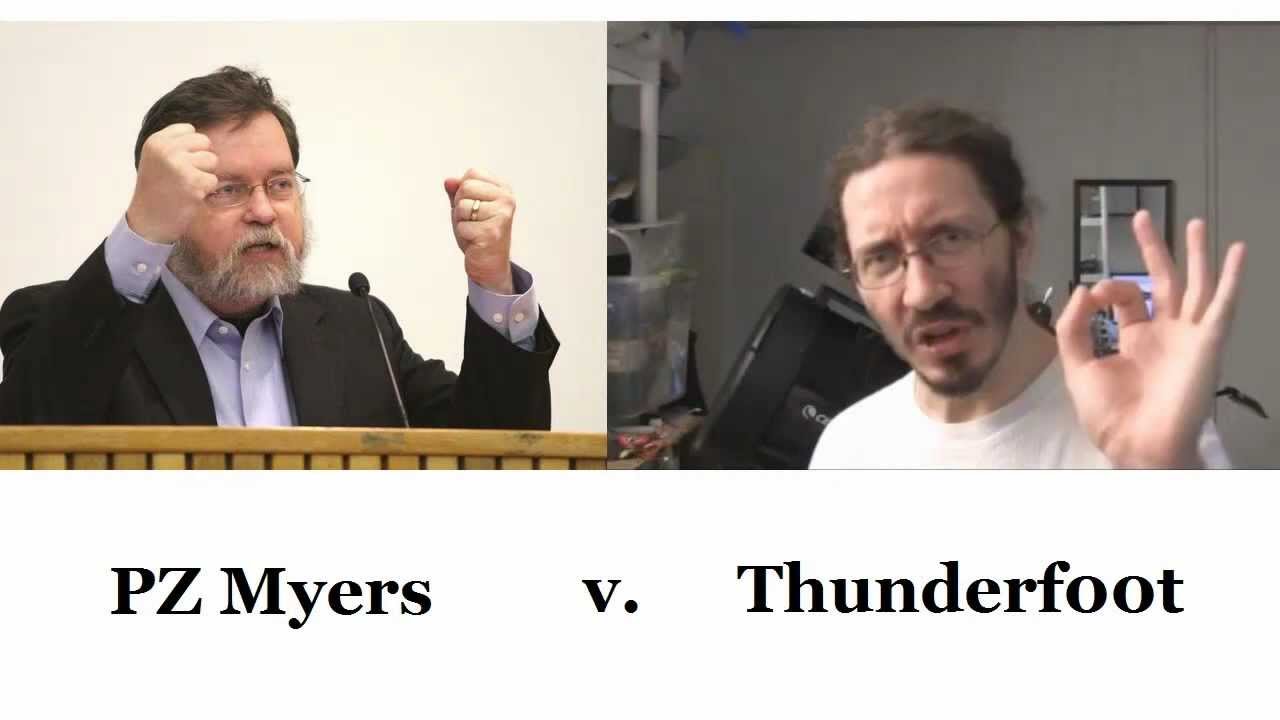 In the end, Feminism won. As of my writing this, Freethought Blogs writes as much if not slightly more about "Feminism, gender and sexuality," than it does about "Atheism and Skepticism." They froze the community, divided it, and conquered it. They appropriated much of the influence and community that decades of work from atheists and skeptics built to advance atheism and skepticism.

They did it in academia. They've managed it in the mainstream news (except for FOX). They pulled it off in my community, atheism. I'm sure they're doing it in plenty of Churches as well. Now they have their sights set on the gaming world.

This is the main reason why I hate Feminism. Sure, I hate it because it is dishonest. I hate it because it insults the individual capabilities of women and it insults the moral integrity of men. I hate it because it's so impossibly stupid, particularly when it comes to explaining gender differences. And while they do all of that, they'll tell everybody who isn't a transgender, asexual, gay black woman that they're privileged, that they're subconsciously perpetuating some systemic culture of bigotry or other, and we ought to feel ashamed about it. I feel no shame in saying I hate that part of it too, both for its hypocrisy and stupidity. But if that was it, and they left me alone, I wouldn't care that much.

But they won't leave us alone. Feminism is a leech. It wants to take the power and resources that other people have made as their own God-given right, and they have no qualms about destroying those creations in the process. This, I submit to you, is an unpardonable sin. I may not be able to do much, but I take great pleasure in what little vengeance I can visit back in return upon this poisonous ideology that is taking over the minds of my generation, by way of breaking people's illusions that they are morally better for calling themselves "feminists;" far from it.

This is why I call myself an egalitarian and an anti-feminist. I'm going to fight against Feminism to the extent that I can, and if you have any self-respect as a woman or any self-worth as a man, I encourage you to join me and do so as well. You don't need Feminism; it needs you.