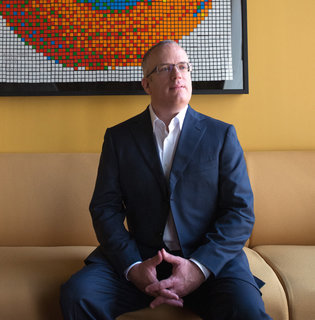 In the last two years I've been writing, and in all of my life prior to that, I've been a staunch supporter of equality for gay couples. Not just for gay people, as some more religiously-inclined conservatives cleverly argue, as though one's sexual preference were merely a lifestyle choice, but for the affirmation that, as Hitchens so eloquently put it in his defense of homosexual relations before a jeering Catholic crowd, "it isn't just a form of sex, but a form of love." Not merely in culture, but in law.

But for all of that to matter, the law has to be respected, and culture, if it is to be changed, rather than simply destroyed, must be respected as well. While it began as a movement for that kind of humble, rational change, the LGBTQ (lesbian, gay, bi, trans, and queer) bloc has found itself in a position of political power and influence, and has turned into the very oppressive bully it once fought so rightfully against.

The boycott of Mozilla Firefox led by OKCupid and subsequent firing of its new CEO, Brendan Eich--the inventor of JavaScript--for the crime of donating a measly $1,000 to the California campaign for proposition 8 is only the latest of these exertions of new-found might. The campaigns against Chic-Fil-A, Hobby-Lobby, and various other groups with different political opinions about the definition of marriage were prominent forerunners, but I myself had an experience with the intolerance of the community that expects it the most.

While at Bellevue College, I wrote a number of articles praising the college's rendition of the anti-Proposition 8 play "8," supporting Referendum 74, and was a participating though inactive member of our campus's LGBTQ resource-center. But when someone snuck in to the resource-center and wrote "fags and homos" across the calendar, I proposed that the incident, while reprehensible, was largely overblown, and certainty not a felony, as the school was purporting it to be. Little did I know that I was defending the bisexual head of the resource center, who school officials later revealed was the only person to have used the door-code to enter the offices between the last administrator checked and left the room (with a slur-free calendar), and its opening the next day, when the anti-gay epithets were found. It was a cut-and-dry case of false-flag offensiveness, and the school found itself in an awkward position.

When I questioned the director herself and the director (who had repeatedly requested I be fired from the Watchdog for my absolutist position on free expression) sent an email to the faculty adviser over the conversation. For that investigation of the subject, along with the editor-in-chief's attempt to interview the head of security, the paper was accused by security of interfering with an investigation-in-progress. Within the fray, I received an email informing me I was being formally reviewed for having possibly "detrimentally affected the Watchdog staff," thus "undermining the educational experience." When the meeting eventually did come around, none of the original charges were actually used, but a new set, in response to a written preview of what my defense to the original allegations was to be, resulted in my termination.

It was a long case, and many parties were at fault for the confusion and hard feelings (my own probably not being the least of them), but the censorial nature of leading members of the LGBTQ movement shine bright through the smog.

These are not one-off cases, nor are they small details curling the edges of a larger, more important, and still morally righteous issue. Suppressing and harassing dissidents is the issue being decided, and the LGBTQ movement has transformed itself from the victim to the victimizer. By destroying people's lives through bully-tactics and demonizing whole businesses over the politics of its executives, they are cutting down the scaffolding that supports not only their ideological opponents, but themselves as well. Needless to say, this by no means implies that all individual members of the LGBTQ community are little inquisitors looking to squelch opposition, but the effect of the movement as a whole is moving that way, as Jonathan Rauch predicted and alluded to in his appropriately titled 1993 book, "Kindly Inquisitors." Indeed, Rauch himself is gay--a gay Jew, no less--and more recently, the gay Andrew Sullivan has been the most prominent critic of the Eich affair.

The gay movement is perfectly within its legal rights to do what it is doing; no one, to my knowledge, is suggesting anything contrary. But for a movement based on broad public support, the threat that at any moment the gang may descend upon you with verbal acid over twitter, facebook, Salon.com, or the Huffington Post if one does not walk with sufficient caution upon the field of eggshells cast out before you, exerting its power like this has costs, and the lost support of people who don't like your bullying tactics is as perfectly legal--and probably more justified--than the illiberal hounding of the religious conservatives that have now found themselves in the minority. I will continue to vote for bills that give equal marriage rights to gay and trans citizens, but the LGBTQ movement has lost my vocal support. I won't show my solidarity with you on social media, and I will go out of my way to buy products from the companies you try to destroy for failing to conform to your ideology. Such a populist method of asserting your group's power is precisely the criticism of raw democracy and its' demagogic tendencies argued since ancient Greece and Rome, and it's nasty side is no less apparent now than it was then.
Posted by C.B. Robertson at 5:25 PM