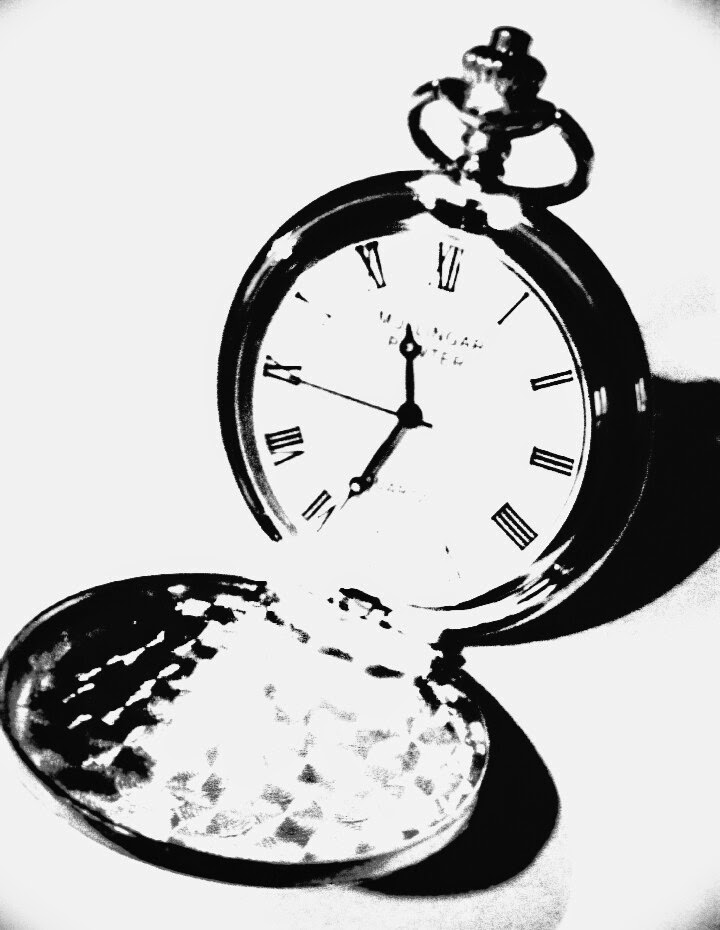 A laser of moonlight pierced the darkness in the old Scottish cave, coming to rest on the closed eyes of the man sleeping there. They opened.

The stone walls were musty, and they sweat droplets down their ancient faces, tears of condensation dripping down the fine masonry in the cool night air. Frost clung to the grass outside, had begun forming on the flat surfaces inside too, and as the man's exhalations increased, the puffs of vapor from his mouth lit up like billowing clouds in the ray of light illuminating the dark chamber.

The man rose up from where he had been laying. He knew what time it was, but he peered down at a primitive-looking pocket watch suspended from a leather necklace, just to be certain. The workings of his body were like those of his time-keeping devices, and they moved together. Even as he rose, the beam of moonlight vanished as the moon passed its mark in the sky. If his calculations were correct, the beam would return again in fifty years time.

The man wore nothing save the watch and a beard of fantastic proportions; although he would have only looked to be in his fifties clean-shaven, the long grey and white strands added a good twenty years to his appearance. After a few long moments of waking up, the smell of the matted hair seemed to disturb even its owner as his movement wafted the years of neglect in the stone dwelling up through his protesting nostrils. First order of business is shaving,he thought.

After food, of course.

The man set about waking up slowly, knowing that the muscular atrophy wouldn't permit prolonged activity as he used to do. He massaged and stretched his limbs as he started the fire. The familiar embers danced and crackled as the hearth was brought back to life from its owner's slumber. The copper rods running beneath the stone floor glowed where the ends protruded into the flames, emanating warmth up through the flagstone. It warmed the wiry sinews in his legs, the calloused bottoms of his feet.

The fifty years had been an approximate. There was no way to be sure if he was a year or two off, and in which direction, but he knew the time was close. The patterns sometimes rushed or delayed a bit, but they never failed. The old calendar room hadn't been calibrated for the time he needed when it was originally built three thousand years ago, of course, and he'd had to do a bit of architectural modification to get the alignment suited to his needs, but it still functioned essentially as it always had. About as effectively too. As far as the man could tell, the alignment had been about one and a half seconds early.

The man packed a leather rucksack as the water boiled: dry food, a blanket, a double-edged knife, and a small collection of gold ornaments and coins. It wasn't much, but it should be enough to purchase a boat-ticket across the Atlantic. The man pulled the knife back out of the rucksack and gripped the handle. The blade felt familiar to him as he drew it and examined the edge, touching it lightly with his finger. A drop of blood formed where the iron had touched. Excellent.

He took one more look at the carefully aligned hole in the wall, where the moonbeam had pierced his eyelids. The faint light of dawn was filtering in, pink and yellow against the black and grey walls, flecked with flickering orange light from the fire. The time had not yet come, but it was approaching.

Reading the obituaries in our local town newspaper had never particularly bothered me. At least not the way I felt that it should. It was always some old strangers passing along, some old stranger with breath that smelled of leather, incorrigible driving habits, a fine taste in literature, who spontaneously sang aloud. Some old stranger who would be greatly missed by their family, their church and (usually quite elderly) friends. The printed praising of the departed made sometimes made me wonder if bad people ever took their turn for a change and died of with the rest of us. Reading the obituaries, it didn't seem so. Reading the obituaries was a train of kind old grandmas with cancer kicking the bucket, making room for their grandchildren, who would deeply, deeply miss them. I know that last part is true because I read it in the obituaries.

But the Koschei family slaughter really was different. This was no story about a stroke finally taking down a beloved family patriarch with one leg already in the grave. Young couple, successful, beautiful, immigrants by the sound of it--Ukranian father and Scottish mother. Beautiful couple, gunned down by bank robbers. Their six-year-old son was in the hospital, a bullet lodged in his heart, but still alive somehow. Adam was his name.

It wasn't their death, I slowly came to realize, but their lack of life that bothered me. Sure, all the old strangers that ate candy and shopped at the farmer's market lacked life when they died, but they had followed their trail all the way. They'd had their allotted time, and were politely passing the baton on. I thought, these deaths shouldn't bother me. I thought: they just finished up their time a bit early. Some take the long road, some go home early. "Go away," I corrected myself. I tend to extend my metaphors a bit too far when I'm thinking.

But something about the theft of these two tugged at something between my shoulder blades and inflated my lungs with hot indignation. The news piece that correlated to the story did make me feel bit better, of course. I didn't need to read it, having written it yesterday myself. The details still came to mind at my command: "two gunmen chased by police... quarter block... gunned down by law enforcement agents, one in critical condition, charges pending..."

One of the clumsy duo had tripped and accidentally sprayed Mr. and Mrs. Koschei with his automatic weapon. Anatol, the tall Ukrainian professor, had been hit five times in the chest, once in the arm, once in his hand, and twice in the neck. He'd bled to death through his carotid artery. Evalyn, the brunette Scottish beauty and advertising guru, had been shot twice in the stomach, once through her left breast, and two more times through her face. The policeman I talked to said even with the bullet wounds in her forehead and cheek, she looked beautiful.

And poor Adam took one in the chest, straight to the heart. I couldn't stifle a black chuckle at the time when I was told the boy was in "critical condition." The phrased seemed so inadequate, describing the state of the boy that once had been Adam Koschei. God knows who he would become after all of this. But if the boy did die, I thought, at least the robbers had shown me that the scales were even with a broad enough picture frame through which to look at the world. The bad guys do die, occasionally. Inevitably. We all have to die. No one escapes.

With that, I finished my coffee got up to go shower.
Posted by C.B. Robertson at 12:57 PM