If you're reading this, thank you S. 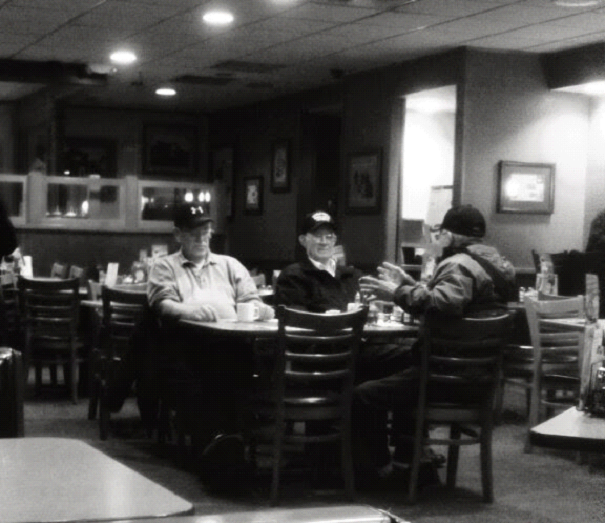 It was a quiet Tuesday evening as Bill walked out of his aging, black car to the Denny's, the one near Our Lady of the Snow Church. The lights of the gas-station pierced through the darkness like those bright lone stars shining through on a cloudy night, and the faintest of winds pressed the cold through his clothes, his skin, and into his arthritic bones. The light dusting of snow had hardened the night before, and it crunched like gravel under his slow, uneven step as he walked up the gently winding path towards the golden, glass door.

Kurt and Frank were already inside, their wispy silver hair covered by the same hat Bill wore. He brushed his shoes off on the mat and walked over to sit down with the other two at a table for four. The waitress glanced at the trio, the corner of her lip rising slightly before she returned to wiping down a table on the other side of the brightly-lit room.

Bill took a seat next to Frank, who was already in a deep discussion with Kurt about flying. All retired now, Kurt had been an investment banker, Frank was a cattle farmer, and Bill had done logistics for an oil company not far from Indianapolis. But here in the quiet evenings of their bright cafe, they were neither retired nor civilian workers, but the soldiers they'd been, together in Vietnam four decades ago.

Robert Frost suddenly came to mind in Bill's brain. It had been four decades since he'd heard it uttered aloud.

Nature's first green is gold
It's hardest hue to hold
It's early leaf's a flower
But only so an hour
Then leaf subside to leaf
So Eden sank to grief
So dawn goes down to day
Nothing gold can stay.

Four decades. The voice had been Barry the poet's, whose ghost now sat with them in that orange and yellow diner, accented with green walls and brown shades. Barry had been the machine-gunner in Bill's team. For a machine-gunner, he had been an incongruously tall and lanky man with a narrow face and an appetite for literature, unbecoming for a marine in the group. He hadn't even done the platoon the courtesy of dying in combat so they could helplessly blame it on his intellectual preoccupations. It was a radar accident; he'd been fried when a radar technician accidentally turned on the system while Barry was cleaning of the crap and corpses of seagulls from the upper heights of their destroyer.

Kurt and Frank's conversation veered from flight to Barry. Kurt, the old Navy pilot, and Frank, the aviation technician, would talk radios and planes for hours, but Bill the Marine couldn't keep up with the more technical tone the conversation inevitably took when technology was involved.

"Well, Barry, it's good to see you again," said Kurt in a thick German accent. His eyes pointed to the empty chair, but his voice was aimed at his two living compatriots.

"To Barry! And to us, who carry his ghost along, at least for a little while longer."

"I'm not sure about you Kurt, my cogs and wheels aren't spinning like they used to," piped Frank in a chuckling Tennessee drawl.

Bill smiled and sipped his coffee with the rest of them. The light brown invigorated him, not in chemistry, but in experience. It flowed through his arms like heat, radiating from his chest. The supernova of a dying star. The other two men sipped their coffee too. Kurt coughed suddenly, with the ragged, guttural cough of the sick elderly. He smiled, then resumed sipping his coffee.

It's been a ride, thought Bill. He had no family; no children, no relatives. His wife had died two years ago. Now he was mourning his wife's death as well as Barry's death. But together, and with his aging, dying friends, it was his death they were mourning--no. Celebrating.

He smiled again, then chuckled aloud. The warm yellow lights glowed over them.

"I have Barry's poem. I know you old farts probably don't need to hear it again, but I'm going to say it anyways, because the odds of one of us chasing after Barry increase with every month."

The others nodded somberly, but smiled then smiled in anticipation of the old ritual. Frank leaned back in his chair a bit, as if relaxing while listening to music.

Though tarnish dims with grey
Gold's lustrous yellow ray,
And time will, from my mind
This beauteous image grind,
Still wondrous is it now
Before my vessel's prow,
This one-way trip to sea
Is gold enough for me.

"Crazy he wrote that at only 24 years old. Gets me every time," said Frank slowly, several moments after Bill finished. "And by that, I mean, he really gets me! Ha!" He slapped the table enthusiastically. "He writes like an old man looking back on the middle age he never knew."

The trio talked and joked into the night--only another forty minutes or so. The time together decreased every year, but felt long enough for them. Conversation shifted around, from Barry to planes, then to football, then to Frank's grandchildren, then to their respective vehicles and their problems, then finally back to Barry.

As Bill walked back out the golden door and into the cold night air, he glanced appreciatively back at the Denny's--it's young waitress, the bright lights, the comfortable tables and good food--as though for the last time, turned, and walked to his black Lincoln Town Car. It looked eminently hearse-like, but the semblance didn't bother him as it might have in his youth. The car itself was suffering the effects of age, and likely only had around ten thousand miles left before it'd need an engine rebuild.

Bill climbed in and took off his hat. He placed it ceremoniously on the passenger seat and turned the ignition key. The old Lincoln sputtered, coughed, and then came to life with a chuckle. "All right Lincoln. Let's go home," he said aloud. He backed up, turned, and, waving out the window to Kurt and Frank, drove off into the night.
Posted by C.B. Robertson at 6:52 PM