Edit: Based on recent revelations that the Norwegian study observed men who were circumcised in adulthood, rather than as children, and on a number of referred articles (1, 2, 3, 4), I've changed my stance to neutral on the subject of infant circumcision since originally writing this post.

Why is crystal meth so bad?

It isn't as though Walter White's product is the equivalent of pot or alcohol with more legal restrictions. Alcohol ups your brain's levels of the neurotransmitter and "pleasure chemical" dopamine by about 2.5 times (above normal), while THC, the active chemical of cannabis, increases it by around 3 times. This is less than sex, as a point of reference. But methamphetamine floods your brain with up to 20,000 times your baseline levels of dopamine. The saturation and marination of a thirty-something-year-old's brain in dopamine that high resets your body's dopamine baseline, and a healthy, sober level is suddenly far below the new norm. The result is a condition called anhedonia, the inability to experience pleasure, even from highly pleasurable past-times like eating, sex, and old hobbies. Crystal meth semi-permanently rewires the brain for the worse.

There is another natural body chemical called cortisol that has a tremendous impact on our brains. Released in response to stress, cortisol changes the body's natural metabolism and suppresses the immune system, an ordinary and healthy response for an adult in a fight-or-flight situation, but otherwise detrimental to our overall health.

Our crystal meth example of the chemical rewiring of the brain is true even of people who are cognitively fully-developed. Imagine the effects of chemical saturation--even comparatively milder saturation--on the mind of an infant within the first days or even hours outside the womb. At some level, everybody understands this concept: we encourage pregnant mothers-to-be not to drink or smoke for precisely this reason. But cortisol is a powerful chemical as well. A family-member of mine severely broke their elbow in their early teens, and subsequently had seven surgeries and an extensive physical therapy program in order to regain some degree of movement. But more interestingly, and importantly for this discussion, their pain-tolerance shrank to near-oblivion. The sensation of touch on any part of their arm was excruciating, as were minor pains on other parts of the body; stubbed toes and the like.

Is it possible that subjecting newborn boys to lacerating the most sensitive part of their body and dousing their sponge-like, developing brains with a hefty dose of cortisol may produce permanent, adverse effects? The jury is still out, as the subject has (strangely) not been very well studied. But circumcision is excrutiating without proper anesthetic, which is usually not used, and the data that has come out [example 1, example 2], does strongly support this hypothesis. The more we learn about the brain, the more obviously important those developing years appear to be. From sociopathy in Romanian orphans from childhood neglect to language development, the early years, and especially the early months, of a child's mental development are crucial to their character later in life. Whether or not circumcision makes people more or less sensitive to pain than they should be--or otherwise affects their brain more generally--will have to be a subject for further investigation, as we simply don't have enough data to make conclusive pronouncements.

Whether or not circumcision negatively effects sensation in the penis, however, is already an academically agreed-upon fact. [Second study].

"But wait!" says the post-hoc apologist, "doesn't decreased sensitivity mean guys will last longer in bed? See, it was a good idea after all!"

Not only is this unwitting defense of barbaric religious prudery completely dismissive of men's pleasure and focusing oddly on women's, when the subject is the removal of half the nerves on the penis (a male organ, in case that wasn't clear before), but happens to be false as well. Actually, it isn't just false: it's backwards. A 2011 study found that circumcision was associated with premature ejaculation.

And speaking of sexual dysfunction, another 2011 study from Denmark found that "Circumcision was associated with frequent orgasm difficulties in Danish men and with a range of frequent sexual difficulties in women, notably orgasm difficulties, dyspareunia and a sense of incomplete sexual needs fulfilment[sic]." The following chart was created from their compiled results. 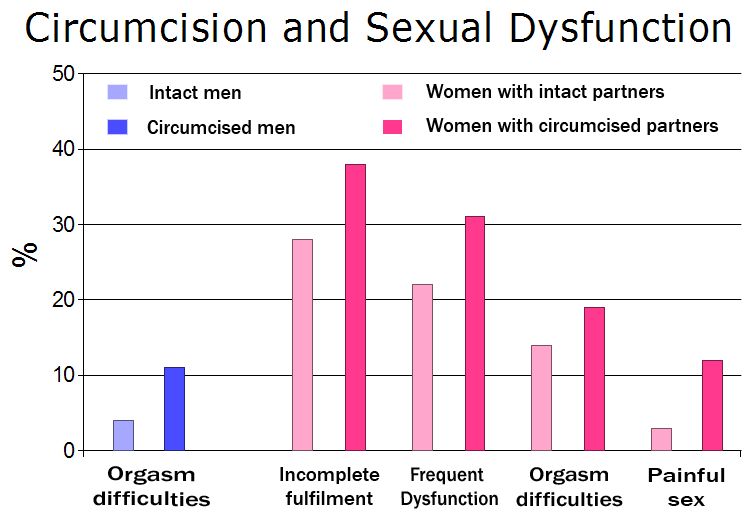 Hardly a ringing endorsement for the benefits of destroying part of the penis, unless you happen to be a believer in the ancient and original purpose of the practice: to curb sexual desires and habits. In that regard, it is indeed a modestly but reliably effective operation.

In the face of all of these downsides, any petty health benefit like a slightly decreased chance of male UTIs--easily treated with antibiotics, which I would like to point out are slightly less invasive than partial removal of a body-part--shouldn't even be discussed, but nevertheless, circumcision still has its defenders. "It helps prevent AIDS," they say. Penile cancer too.

While the dangers of AIDS and penile cancer can be preemptively tackled without resorting to a knife, that misses the deeper psychological problem here. Do you think these people would suggest or support the idea that women, after having their last child, should have their breasts surgically removed? Breast cancer is FAR more common than penile cancer (the AIDS-deterring effect of circumcision is marginal), and yet no such suggestion has been seriously brought to the table. The difference in attitudes over the health question--regarding the efficacy of removing body-parts willie-nilly, so to speak--suggests that these justifications have less to do with the actual medical benefits, and more to do with how people want to think about themselves. This is especially true of two groups of people in particular: parents who have circumcised their children, and men who have themselves been circumcised, because it is painful and difficult to imagine yourself as a cause or a victim of senseless mutilation. The implications are uncomfortable to contemplate for both group. But comfort is a poor guide to truth (to put it mildly), and the validity of that discomfort that should be a stronger reason for solidarity in being done with this atavistic and barbaric carry-over from the bloody superstitions of the pre-scientific ages, rather than a tranquilizing excuse for the continuation of this ritual cut.
Posted by C.B. Robertson at 8:22 AM